Glanbrook Gazette, July 2, 2015
The Toronto Maple Leafs are in the Stanley Cup Playoffs for the second year in a row. Will they defeat the New York Rangers to win the coveted cup two years in a row? Famous bank robbers Bonnie and Clyde have another shoot-out with police. Will they get caught this time? German Chancellor Adolph Hitler is making changes in Germany that has the rest of the world taking notice.

It’s April 1933 and while others are looking forward to the upcoming Easter long weekend, twenty-five-year old Janetta Fanson is planning a funeral. Her life is suddenly spiraling downhill; this is not the life that she and her husband had planned together. With three children under four—and a fourth on the way—Janetta must raise her children with no job or driver’s license during the worst year of the depression. Travel with Janetta on her journey of self-discovery, through inquests and decisions, and learn how she reclaims her life and starts to live again.

“I plan to have several book readings and events,” explains Fanson, “but I thought it was fitting that the first book launch should be in Fulton, since that’s where the story takes place.”

Tragedy on the Twenty is a historical fiction novel based on her grandmother’s real-life experience. Author Barbara Fanson’s great-grandfather Edward owned the Fulton Store during the depression and lived upstairs with his wife Malvina, son Harry and his wife Janetta, and their three sons Gordon, Orval, and Robert. Janetta was pregnant with their fourth child when tragedy arrived on Palm Sunday of 1933. She didn’t have a car, but managed to visit her husband Harry before he died three days later in St. Joseph’s Hospital in Hamilton.

The book contains newspaper clippings of the accident and the inquest, photographs, maps, and illustrations drawn by the author. As a historical fiction book, it also contains prices and events from 1933, which readers may find interesting.

The King’s Highway 20 from Niagara Falls to Hamilton was changing between 1930 and 1933 and Harry Fanson drove a dump truck for a construction company before he died in 1933. The Stoney Creek Cut was started in 1932 to change the highway so it would go down Stoney Creek mountain instead of along Rymal Road and Upper Gage.

Author and graphic designer Barbara Fanson has written over 30 non-fiction books traditionally and self-published, but this is her first historical fiction novel.

The author will do a short reading, presentation, and sign copies of her newest book Tragedy on the Twenty. Everyone is welcome to attend the free events:
Smithville Public Library on Wed. Sept. 9 at 7 p.m.
West Lincoln Historical Society on Thurs. Oct. 1 at 7:30 p.m.
Harvest Routes, A Celebrations of Arts & Culture in Smithville on Sat. Oct. 3 from 11 a.m. – 4 p.m.
Grimsby Public Library in Grimsby on Thurs. Oct. 8 at 7 p.m. 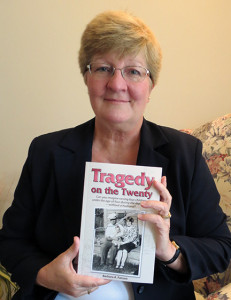